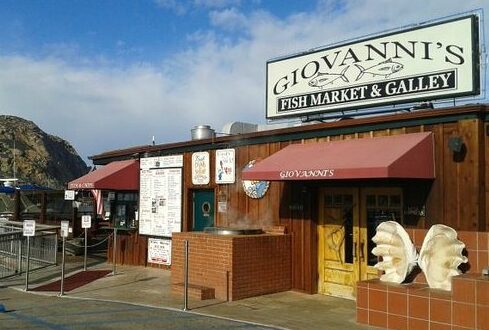 A former employee has sued Giovanni’s Fish Market in Morro Bay alleging she was sexually harassed. It is the fourth such claim made against the company in less than three years.

Amid the pressure, Schneider agreed to have drinks with Ferreira at The Siren Bar in Morro Bay, where things allegedly became so uncomfortable she called a family member to pick her up.

After Schneider turned him down, Ferreira found “sexually suggestive photographs” of Schneider online and then shared them with colleagues, the lawsuit says. Schneider reported Ferreira to the owner of the market, Giovanni DeGarimore.

“Rather than seeking to remedy the situation, owner Giovanni DeGarimore himself made lewd and obscene comments to plaintiff, asking whether she had engaged in sexual relations with her supervisor,” the lawsuit says.

In addition to the sexual harassment claim, the lawsuit alleges violations of the labor code including not paying overtime compensation and failures to provide meal and rest breaks.

In the lawsuit, Stulberg is asking the court for compensatory and punitive damages, and for court costs and attorneys’ fees.

In June 2021, Stulberg filed three sexual harassment lawsuits against Giovanni’s Fish Market, each one related to alleged unwanted sexual advances made towards underage high school students. Because of their ages, the students’ names are not provided.

The first alleged victim, who was 16 when she was hired as a dish washer, complained that another kitchen employee known as Diego would flirt, corner her and inappropriately touch her chest and buttocks, according to the lawsuit. The teen complained to her managers and reported the behavior to the police.

“Diego admitted touching plaintiff when interviewed by the police, but claimed it was only a hug and that he bumped into her ‘simply to say hi,’ ” the lawsuit says. “Charges were never filed.”

Another plaintiff was 14 years old when she went to work for Giovanni’s Fish Market. She said an adult male employee sexually harassed her and that the harassment included unwanted touching. She reported the issue to DeGarimore, and quit after he did not take action, the lawsuit says.

“Owner Giovanni DeGarimore characterized it as a ‘he said, she said’ situation and implied that the other employee’s reputation was more important than plaintiff’s safety,” according to the lawsuit.

In the prior three cases, Giovanni’s Fish Market entered into private settlement agreements with the plaintiffs. DeGarimore said he does not discuss current or past lawsuits.

Stulberg’s boat, the “Hideout,” which was docked in Morro Bay, was found sunk last night. The Morro Bay Harbor Patrol pulled the boat out of the water and a police report was filed.

DeGarimore, who said he did not know Stulberg owned a boat, referred to the sinking as “karma.”