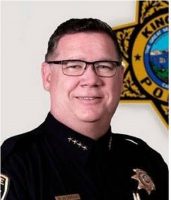 The city of Atascadero fired its police chief on Wednesday, citing incompatibility with the city’s top executive as reason for the termination.

For weeks, City Manager Rachelle Rickard discussed firing the chief after he refused to adopt her management style, sources said. When the chief returned last month from vacation, Rickard told him he was fired.

Rickard regrouped and asked the council, after promoting complaints against the chief made by an underling, to terminate Masterson, which the city council agreed to do on Tuesday.

Ultimately, the city released Masterson under a section of his contract that allowed for his termination on a not-for-cause basis. The clause is often included in employment contracts for municipal government executives, and it allows for termination if the worker is not a good fit, according to Rickard.

“Incompatible management styles” is the compelling reason behind the police chief’s termination, according to the city.

Bob Masterson, who is now owed more than $100,000 in severance pay, served less than two years as Atascadero’s police chief.

“Chief Masterson is a very capable chief with strong leadership skills, so it was only after very careful consideration, that it was decided to end Chief Masterson’s employment with the city,” Rickard said in a statement. “We appreciate Chief Masterson’s service to the city over the last 20 months and thank him for the dedication, integrity, commitment and heart that he brought to the job every day.”

Masterson’s employment contract entitles him to six months of salary and benefits if terminated without cause.The city has agreed to pay him $103,777, according to his severance agreement.

City officials will begin the search for a new police chief in the upcoming months.