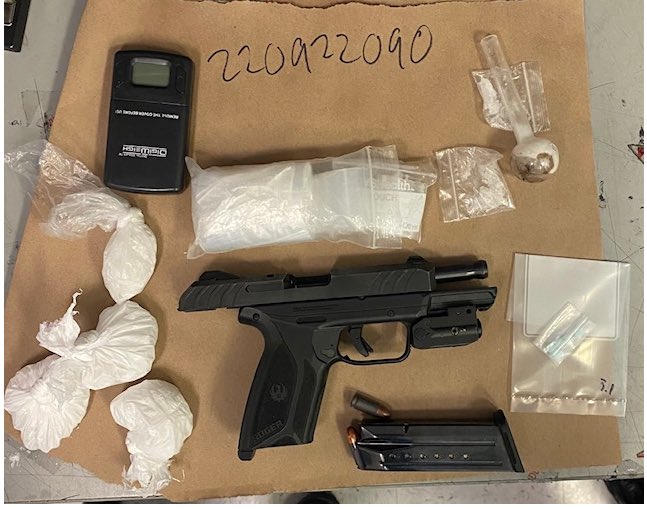 San Luis Obispo police officers caught a trio of Santa Maria residents Thursday evening with drugs, a loaded gun and bottles of tequila that had just been stolen from BevMo!

Shortly before 8 p.m., a man stole several hundred dollars worth of tequila from BevMo! on Los Osos Valley Road and then fled to a Cadillac that was waiting nearby, according to the San Luis Obispo Police Department. After police were alerted to the theft, an on-duty sergeant quickly arrived at the scene and found the Cadillac leaving the parking lot.

The officer conducted a traffic stop, during which the driver was identified as 43-year-old Patrick Duncan, a known gang member from Santa Maria.

Officers searched Duncan and found he had a loaded 9mm handgun concealed in his waistband. The gun had a loaded magazine with one round in the chamber. Duncan also had a quarter pound of methamphetamine concealed on his body, police say.

Investigators identified the theft suspect as Samuel Zamora, 58. Zamora had the stolen bottles of tequila in his possession.

Another passenger, Angelena Estrada, 47, was found in possession of methamphetamine and drug paraphernalia.

Officers arrested Duncan for possession of a controlled substance while armed, possession of methamphetamine for sale and felon in possession of a firearm. Police arrested Zamora for shoplifting and having warrants. Officers booked Duncan and Zamora in SLO County Jail.