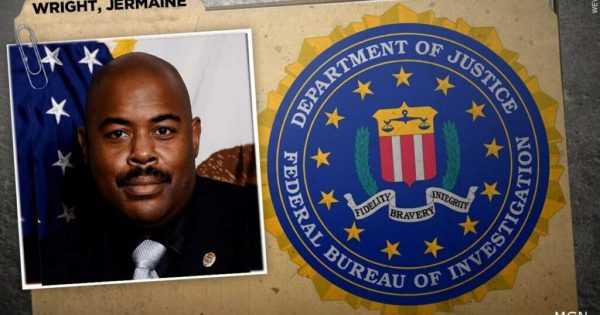 A federal judge on Monday sentenced a former Adelanto city councilman to five years in prison for taking a $10,000 bribe over a marijuana regulations vote and for hiring a man to burn down his restaurant, so he could fraudulently collect hundreds of thousands of dollars in insurance proceeds. [San Diego Union Tribune]

Jermaine Wright, 46, of Riverside, was found guilty in June of one count of bribery of programs receiving federal funds and one count of attempted arson of a building affecting interstate commerce. U.S. District Court Judge Jesus G. Bernal sentenced Wright to the statutory minimum of five years for the crimes. Wright faced a maximum sentence of 30 years in federal prison.

In early 2017, federal investigators began a probe into possible corruption in Adelanto, a city located in San Bernardino County. During the investigation, law enforcement used an informant who introduced Wright to two undercover FBI agents and recorded a series of conversations in which Wright discussed both plots.

In the first scheme, Wright – then an Adelanto city councilman, as well as the city’s mayor pro tem – accepted a $10,000 bribe from an undercover FBI agent who told Wright he wanted his assistance in securing votes to expand the marijuana business zone, and for protection from code enforcement related to a supposed marijuana transportation business.

The undercover FBI agent told Wright he was interested in using a property outside of the zone designated by the city for marijuana businesses. The agent specifically wanted Wright’s assistance in expanding the area where a marijuana transportation business would be permitted.

At a meeting with the undercover agent and the informant, which took place in Oct. 2017, Wright took a $10,000 bribe from the undercover agent. After taking the bribe, Wright confirmed that he would assist with code enforcement and votes. Wright also said he could curtail code enforcement activities against the marijuana transportation business, but it would require a “stack” – which Wright identified as $2,000 – each time Wright interceded.

In the second scheme, in Aug. 2017, Wright sought the informant’s assistance in finding someone to burn down Fat Boyz Grill, his restaurant in Adelanto. In late September, Wright asked the informant to pass his cell phone number to the “electrician” – so named because Wright wanted the cause of the fire to appear to be an electrical problem.

Wright met the “electrician” – actually the second undercover FBI agent – on Oct. 3, 2017 and said he wanted the fire on the following Saturday when the sprinkler system would be turned off. After Wright assured the undercover agent that his insurance policy covers everything, the “electrician” agreed to do the job for $1,500. At a meeting three days later, Wright paid the $1,500 after the undercover agent told Wright he needed more time to prepare for the job.

Wright also gave the agent a tour of the restaurant and assisted in the planning of the arson by providing a ladder for the undercover agent and discussing various tactics to ensure the planned arson would be a success.

Wright also attempted to hatch a plot with the informant to stage an assault on Wright himself to make the FBI drop the case against him. In Nov. 2017, Wright reported that he had been assaulted. The circumstances of the alleged assault were consistent with the staged assault that Wright discussed with the informant.