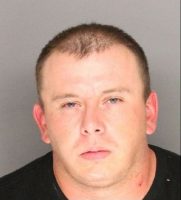 Santa Barbara County Sheriff’s detectives are seeking help from the public in locating a Lancaster man who allegedly murdered a person in Santa Ynez over the weekend, then fled in a stolen vehicle.

Detectives have identified the suspect as Rylen Quinn Svane-Morris, 26. Svane-Morris is described as a white man who is 5 feet 11 inches tall and 190 pounds with light brown hair and blue eyes.

A little before 4 a.m. on Saturday, a 911 caller reported an emergency in the 1000 block of Jason Way in Santa Ynez. Deputies arrived and found an adult male victim, who later died at the scene. Svane-Morris allegedly fled before deputies arrived.

Several hours after the killing, investigators discovered a blue 2014 Chrysler Town & Country minivan had been stole from a home in the area where the murder occurred. Due to the proximity of the locations, detectives believe Svane-Morris stole the minivan after committing the murder, sheriff’s officials say.

The stolen minivan has a California license plate numbered 7GJW053.

Authorities say Svane-Morris should be considered dangerous. Anyone who spots the suspect or the vehicle should call 911 and not attempt to make contact.

Officials are still withholding the identity of the victim.