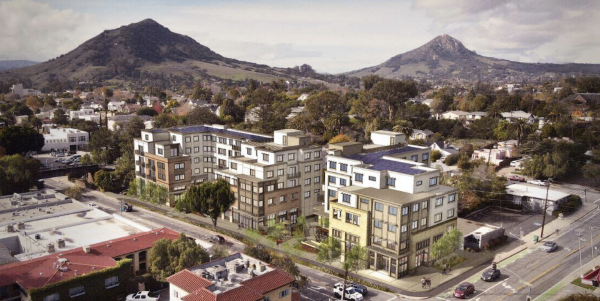 The San Luis Obispo Planning Commission on Wednesday voted to give preliminary approval for a large affordable housing development on Monterey Street that will include two five-story mixed-use buildings.

Plans call for the Housing Authority of San Luis Obispo (HASLO) to build a 106-unit development spread across two five-story buildings and two two-story triplexes on Monterey Street between California Boulevard and Pepper Street. The project consists of 105 residential units for low-income residents, 56 of which would be for senior households.

The plans call for one unit for the manager’s quarters. Likewise, the development would contain 4,336 square feet of commercial space, as well as a three-story parking garage.

Due to the project’s affordable housing designation, HASLO is in line to receive approval for constructing a 54-foot-tall building in an area normally restricted to 45-foot structures. The planning commission also approved reductions in parking and setback requirements for the project.

Part of the development would replace the building that currently houses Central Coast Brewing. George Peterson, the owner of Central Coast Brewing, is moving his business to a new development named The Hub, which is situated nearby on Monterey Street close to Grand Avenue. Peterson previously said he initiated the creation of The Hub due to his brewery being kicked out of its current location.