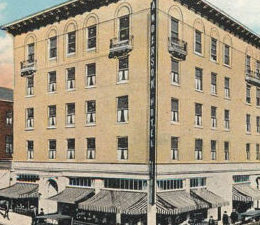 Following a deal with the state of California, the Housing Authority of the City of San Luis Obispo (HASLO) will purchase the Anderson Hotel in downtown SLO and convert it into an apartment building intended to house homeless people.

California Gov. Gavin Newsom announced on Thursday he is awarding HASLO $11.6 million toward the purchase and remodel of the Anderson Hotel. The 68-unit hotel has contained affordable housing for very low-income seniors and disabled people for more than 40 years. HASLO currently administers the affordable housing units in the building.

HASLO will convert the structure into a 42-unit apartment building, according to Gov. Newsom’s office. Two of the units will serve as manager apartments.

Newsom announced funding for the San Luis Obispo project along with grants of $19.9 million, $2.4 million and $2.2 million respectively to the city of San Jose, San Benito County and Santa Cruz County for other homeless housing projects. Each of the grants are part of the state of California’s ongoing Homekey awards, a program that funds the purchase and conversion of properties, including hotels, motels and vacant apartment buildings, into housing for the homeless.

Previously, the state awarded HASLO a grant of $15 million in order to purchase Motel 6 in Paso Robles and convert it into a shelter and housing for the homeless.

“Homekey is proof once again that what California is doing to solve homelessness – and to keep people from falling into homelessness in the first place – is moving with speed, innovation, and on-the-ground coordination,” said California Department of Housing and Community Development Director (HCD) Gustavo Velasquez. “HCD first heard about the Anderson Hotel through our work with Preservation Notice Law, and through robust technical assistance and flexible resources like Homekey, we are preserving much-needed affordable homes for seniors to age in place.”