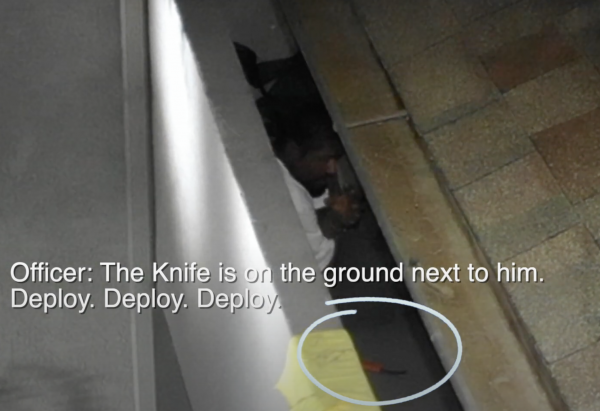 Santa Maria police released wild video footage of an incident in October in which officers shot and killed a man armed with knives who had attempted to break into an apartment with a woman and child inside.

In the video, which contains multiple camera angles, including drone footage spliced in, the man can be seen throwing a knife, a bicycle and chairs at police. He can also be seen getting shot by a less-than lethal projectile and coming under pepper ball fire.

Likewise, video shows the suspect smashing the front window of an apartment occupied by a woman who, on a 911 call, had already threatened to shoot him if he tried to enter her home. The video, though, does not contain footage of police fatally shooting the man.

At approximately 10:21 p.m. on October 30, a Santa Maria police officer contacted Salvador Maceda, 36, near a dumpster in the 1000 block of W. Morrison Avenue. Maceda displayed two knives, according to the Santa Maria Police Department.

The officer requested backup. Other officers arrived and told the man more than 20 times to drop the weapons, police say. Maceda refused to do so.

Video footage shows Maceda approaching police. An officer then fires a less-than lethal projectile that strikes him around his stomach. Maceda throws a knife, striking a police car and coming close to officers.

The suspect then fled to a nearby apartment and hid behind a wall on the balcony a second-story apartment unit. The apartment was occupied by a woman and her young daughter.

With the suspect standing outside her door, the woman called 911. In a recording of the 911 call, the woman can be heard saying, “I am in my bathroom, and I have a gun registered to me, so if this guy… like I said, I do have a registered gun, so if he tries to come into my house, I will…”

The dispatcher interjects multiple times, at one point telling the woman, “Ok ma’am, we have officers there. Please don’t fire.”

Officers and a hostage negotiator speak with Maceda in Spanish for more than 90 minutes. The negotiator repeatedly asks Maceda to set down a knife.

At one point, Maceda drops a knife on the balcony, video footage shows. Officers then fire pepper ball rounds at him. Maceda responds by throwing objects, including a bicycle and chairs, at officers.

Maceda picks the knife back up, along with a large red board, which he uses to smash the front window of the apartment. At that point, an officer or officers shoot Maceda, according to the police department

Officers attempted to render aid, but Maceda succumbed to his injuries.

At the time of his death, Maceda was on probation for offenses stemming from a Dec. 2021 standoff, during which he threw glass bottles at officers.