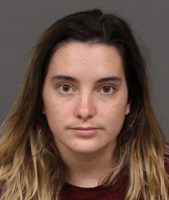 A Los Osos woman who struck and killed a Cal Poly student while driving under the influence in 2017 faces a new prison term after pleading guilty Wednesday to a DUI offense that occurred on Halloween in 2021.

Gianna Brencola, 23, now faces up to six years in state prison. Following her vehicular manslaughter offense, she faced a maximum of 10 years in prison, but received a seven-year sentence and spent less than four years behind bars.

On Aug. 29, 2017, Brencola, then 17, struck the bicycle of Kennedy Love while driving on Foothill Boulevard near Ferrini Road in San Luis Obispo. Following the collision, Brencola and a female passenger fled the scene while Love’s body was lying in the street. Brencola’s blood alcohol level was .14, about five and a half hours after the collision, according to the SLO County District Attorney’s Office.

Brencola was first incarcerated in juvenile hall on Aug. 30, 2018. She then served a stint at the SLO County Jail before spending slightly more than a year and a half in state prison, for a total of three years and seven months of incarceration. She was paroled in Dec. 2019 and discharged from parole in March 2021.

The California Department of Corrections and Rehabilitation released Brencola early because she participating in a community reentry program while housed in prison, according to the district attorney’s office.

On Oct. 31, 2021, Brencola struck several parked cars while driving with a blood alcohol level of .32. Morro Bay police officers arrested Brencola for DUI and booked her in the SLO County Jail. At the time, officers were unaware of her prior vehicular manslaughter case, and she was released from jail the following day.

In Feb. 2022, prosecutors filed a DUI charge against Brencola, as well as an enhancement for her prior conviction. Prosecutors also requested a warrant for Brencola’s arrests.

On Feb. 28, Brencola appeared in court for an arraignment hearing. Following the hearing, she was taken into custody and transported to the SLO County Jail, where she currently remains.

On Wednesday, Brencola pleaded guilty to felony driving under the influence of alcohol. The conviction comes with a maximum sentence of three years, which can be doubled due to her having a strike under California’s three strikes law for her prior conviction of vehicular manslaughter while intoxicated.