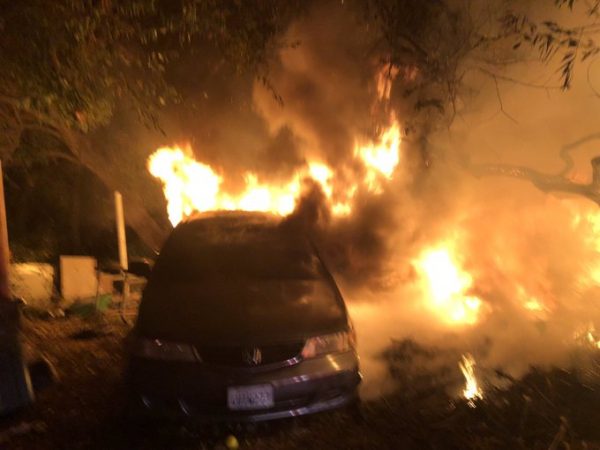 Fire in 2021 at the Prado Road property.

A judge placed a San Luis Obispo property located next to the Prado Road homeless shelter in a receivership earlier this month, ruling authorities must step in to clean up the criminality and dangerous conditions at the location.

SLO resident William Sievers owns a 2.2-acre lot that is adjacent to the 40 Prado Homeless Services Center. The property has been used to store recycled items ranging from cars to appliances to machine parts.

In recent years, the property has devolved into a haven for squatters, thieves and other individuals who have started fights and fires and engaged in drug deals and general mayhem. Sievers rents the property to tenants, some of whom have been difficult to evict over the course of the COVID-19 pandemic, he said.

The city of San Luis Obispo filed an emergency order to appoint a receiver to take control of the property. Sievers, in turn, tried to convince a judge that he is in the process of removing trespassers, increasing security and cleaning up the land.

Attorneys representing the city argued Sievers has yet to do so, despite years of warnings, which has resulted in more than 100 police calls and two fires since 2020.

Judged Tana Coates issued a ruling on Dec. 14, siding with the city and granting the receivership request. Coates assigned the property to California Receivership Group Inc., which can take out loans against the lot to bring it up to city code.

Coates wrote in her ruling that she is sympathetic to Sievers’ issues, but she is unsure what more he can do to remedy the situation, given that problems at the property were identified in 2017 and have still not been resolved.

“Again, the court understands there are individuals at the property who are taking advantage of [Sievers] and who refuse to comply with his requests and lawful demands,” Coates wrote. “Thus, the court finds the city must step in to ensure the health, welfare, and safety of the public.”

Sievers and a friend who lived at the property allege the city did not adequately step in to address the escalation in criminal activity happening there.

Kathi DiPeri said in a handwritten court statement that she was violently assaulted on the property and police did not respond appropriately. DiPeri said she called police multiple times.

“COVID had changed the rules and gave the police an excuse to do nothing about criminal activity,” DiPeri wrote in the statement. “Their patent answer was it’s a ‘civil matter.’ My being assaulted, theft, selling and doing drugs, breaking into my vehicle, and moving stuff out and selling it are not civil matters. They are criminal acts and should have been treated as such.”

The next court hearing in the case is scheduled for  Jan. 18.