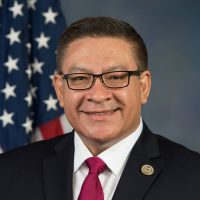 Carbajal’s office said in a press release that the congressman had been advocating for the federal funds since April. Carbajal helped ensure they were included in the $1.7 trillion omnibus spending bill that passed both houses of Congress last week.

“With these funds, we will be able to make critical upgrades to our roads and highways, bridges and piers to keep commerce and people moving smoothly throughout our region,” Carbajal said in a statement.

Carbajal secured $2.07 million to help fund the Prado Road bridge replacement project in the city of San Luis Obispo. The project includes improvements and modifications to the intersection of Prado Road and Higuera Street, in addition to the replacement of the bridge.

Other federal funding for SLO County includes $1.5 million toward upgrades to Morro Bay’s North T-Pier and $500,000 toward the rehabilitation and retrofit of the Swinging Bridge in Arroyo Grande.

In all, Carbajal managed to secure $22.5 million for a combined 14 projects in his district. One project outside of SLO County is a Highway 101 carpool lane extension between Santa Barbara and Ventura.