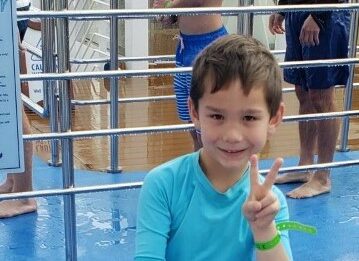 The mother of the missing 5-year-old boy who was swept away by raging floodwaters near San Miguel has revealed what she witnessed on that tragic Monday. [KSBY]

On the morning of Jan. 9, Lyndsy Doan was driving through the San Marcos Creek bed outside of San Miguel with her son Kyle Doan. Her vehicle then became stuck in the flooded creek bed.

Lyndsy Doan described the final moments trapped inside the car while it filled with water, with her son strapped in a booster seat in the back.

After she realized she was drifting, Lyndsy tried to lower the windows but could not, the mother said. Thinking the best action would be to exit the car, Lyndsy Doan opened her door, she said.

Her son was strapped in his booster seat. She told him to climb over to her door, which was open. He took off his seatbelt.

As they struggled against the raging floodwaters, Kyle Doan attempted to reassure his mother.

Lyndsy Doan managed to grab onto her son, but the current pushed him out of her hands. She saw her son’s head floating. He was looking at her for a little bit of time while going backwards, Lyndsy Doan said.

Bystanders rushed to rescue Kyle Doan. They threw a rope but could not get it to him.

The bystanders managed, though, to pulled Lyndsy Doan out of muddy waters.

Rescue teams have since searched daily for the missing child.

More than 100 National Guard troops are now assisting personnel from local and state agencies as they try to locate Kyle Doan.