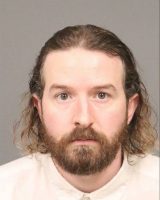 Months after numerous women accused two local business owners of sexual misconduct, detectives arrested one of the men on felony sex charges and are searching for the other suspect.

Last year, more than 30 women came forward on social media with allegations against Julian Contreras, then-owner of Kin Coffee Bar in San Luis Obispo, and Nate Abate, the owner of Nate’s Barber and Hair Design in Atascadero. Abate has since changed the name of his business to Cardinal Barbershop.

SLO County Sheriff’s detectives conducted an extensive investigation, after which they obtained arrest warrants for both Contreras and Abate.

On Thursday, detectives arrested Abate in the 5900 block of Entrada Avenue in Atascadero for rape of an intoxicated person and oral copulation with a person under 18 years old. Detectives are currently searching for Contreras.

Prosecutors charged Abate with felony oral copulation of a person under the age of 18 and felony rape of an intoxicated victim.

Deputies booked Abate in SLO County Jail with his bail set at $500,000. The sheriff’s office website, though, does not currently list Abate as being in custody.

The case marks the second time prosecutors charged Abate with sex crimes. The previous case resulted in a plea deal.

After allegations surfaced on social media last year, the victim in a 2009 arrest for statutory rape told CalCoastNews her story of alleged sexual molestation by Contreras and Abate. CalCoastNews referred to the victim as BB to protect her privacy.

While still in middle school, at age 13, BB first met the two high school graduates at a party at Contreras’ parents’ home in Santa Margarita. She then began hanging out with them.

After plying her with alcohol and marijuana, Contreras and Abate would have sex with the teen, she said. At that time, the sex was consensual, BB said.

While in Contreras’ home in Santa Margarita in 2009, the teen said Abate sexually assaulted her, while Contreras was in the same room.

When she arrived home, BB’s mother encouraged her to go to the hospital for a rape test. The test found DNA, and law enforcement mounted an investigation.

At the time, BB refused to talk with prosecutors or testify.

In 2012, prosecutors dropped the charges of statutory rape and digital penetration in exchange for a plea deal. Abate pled to false imprisonment, according to court records.